First of all, notice that the title says a “good” movie. There is absolutely no question in my mind that the 2019 Marvel Studios film Captain Marvel, the story of Air Force pilot turned super-powered space warrior Carol Danvers (Brie Larson), will be a huge financial success. With the massive hype surrounding Avengers: Infinity War and the Captain Marvel teaser at the end of the credits, Captain Marvel could be the single worst film in history and it would still make an obscene amount of money. It would almost be delusional at this point to imagine Captain Marvel being a flop. It will make money. But as a fan of the Marvel Cinematic Universe, I don’t just want a movie that makes money. I want a GOOD movie that just happens to make money. What are some things that Marvel should do to make that happen? Here we go.

Captain Marvel will be somewhat of a prequel in the vein of Captain America: The First Avenger as it is set in the past, the past being the 1990s rather than the 1940s in this case. Setting the film in the 1990s gives the film the opportunity for a lot of great moments, comedic and otherwise. Agent Phil Coulson can return, we can see a young Nick Fury in his prime, possibly Iron Man’s father Howard Stark, maybe a younger Hank Pym from his Ant-Man days, etc. The list is endless with the little moments they can create with this setting, not to mention the mystery of where has Captain Marvel been since the ‘90s and why no one but Nick Fury has ever seemingly heard of her or knows how to contact her. That being said, the 1990s setting will also undoubtedly provide ample opportunities for the expected Marvel wit and humor. That’s fine, but let’s try not to go overboard. Humor is great, but it’s better when it’s balanced and nuanced. The MCU’s previous outings of Avengers: Infinity War and Black Panther pulled off the balancing act quite well. I expect July 2018’s  Ant-Man and the Wasp to be much more light-hearted and strong with the comedy coming on the heels of some of the heaviness of Infinity War. That’s fine for Ant-Man, but Captain Marvel should carefully walk the line between humorous moments and outright ridiculousness. It’s fine if they crack some jokes, but let’s treat Captain Marvel with the gravitas that a cosmic powerhouse like her warrants.

4. BE PROUD THAT CAPTAIN MARVEL IS A WOMAN.

Now, you might be thinking, that’s stupid. Of course they’re going to be proud that she’s a woman and Marvel is doing its first female lead solo film. They’ll be shouting that from the rooftops. No, I mean allow her to be feminine. There seems to be the weird idea that the way to make a female superhero is to essentially make her more masculine. The Captain Marvel comics are certainly guilty of that as you can see how they have altered her appearance and behavior over time and particularly in recent years. Wonder Woman proved the ridiculousness of the masculinization of female heroes. Wonder Woman (Gal Gadot) was strong, independent, intelligent, and heroic. She was also feminine. Diana smiled, she was gentle, nurturing, went “awww…” at the sight of a baby, and fell in love with Steve Trevor(Chris Pine). Those things do not make a female character weaker. If anything it makes them stronger. It strikes a balance between this traditionally “man’s world” of fighting, war, military, and super heroics with traditionally feminine traits, showing that a woman can be at home in both worlds simultaneously. Captain Marvel would make for  a stronger character by following Wonder Woman’s example.

It should go without saying that women are human beings. Another unfortunate side effect of the female super hero is the tendency to not treat her like a real person. And no, I’m not talking about Carol having superpowers from alien contact. What I mean is when you end up with a character without any human flaws who makes no mistakes, never fails or suffers setbacks, and is generally not realistic. There’s even a pop culture term for it: a “Mary Sue” (yes, there’s a male equivalent, the “Gary Stu”). Rey from the Star Wars films, for example, is frequently accused of falling into the “Mary Sue” category. Whether you agree or not that that is the case with Rey, I don’t think anyone wants a character that is truly a Mary Sue or a Gary Stu. Women are people and people make mistakes and have flaws. It’s what makes a character endearing. It’s what makes us relate to them. We suffer with them in their failures and rejoice with them in their triumphs. Those are the characters we tend to remember and love be they men or women. When I see Brie Larson take on the character of Carol Danvers, I want to see a fully realized person, warts and all.

2. GIVE THE ORIGINAL CAPTAIN MARVEL THE RESPECT HE’S DUE. 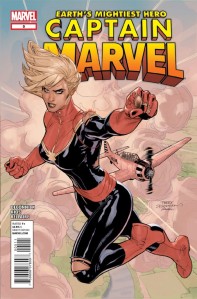 This may seem like a strange one as usually I’m the last one to suggest such a heretical thing. I’m generally pretty big on preserving and adhering to the comic book lore, but the thing with Carol Danvers is that her comics just haven’t been that spectacular. I challenge anyone to point out even one timeless classic or generally beloved story from a Marvel Comic that featured Carol Danvers’ Captain Marvel as the central figure. What I’m saying is that other than some basic characterization and origin details, there isn’t that much from the character’s comic book history that is absolutely essential to properly translating Carol from comic to movie screen. That frees up the movie’s creators to go just about anywhere they want with the character. They certainly won’t have the immense pressure that director Patty Jenkins had in translating such a well-known and beloved character like Wonder Woman. Captain Marvel is largely unknown to general audiences and frankly isn’t really that big of a deal to most comic book fans. This movie has a very good chance of defining and popularizing this character in a way that the comics never have.

View all posts by W.H. Williams

Follow Five Geeks Blog is a place for the Five Geekdom to experience the content about Geek Culture! on WordPress.com

Our Latest and Greatest